Shiqiang Wang received his Ph.D. from the Department of Electrical and Electronic Engineering, Imperial College London, United Kingdom, in 2015. He is a Research Staff Member at IBM T. J. Watson Research Center, NY, USA since 2016, where he was also a Graduate-level Co-op in the summers of 2014 and 2013. In the fall of 2012, he was at NEC Laboratories Europe, Heidelberg, Germany. His current research focuses on the intersection of distributed computing, machine learning, networking, and optimization. Dr. Wang serves as an associate editor of the IEEE Transactions on Mobile Computing. He has also served on the technical program committees (TPC) of prominent international conferences. He received the IEEE Communications Society Leonard G. Abraham Prize in 2021, IBM Outstanding Technical Achievement Award (OTAA) in 2019 and 2021, multiple Invention Achievement Awards from IBM since 2016, Best Paper Finalist of the IEEE International Conference on Image Processing (ICIP) 2019, and Best Student Paper Award of the Network and Information Sciences International Technology Alliance (NIS-ITA) in 2015.

Machine Learning at the Edge

Placement and Scheduling in Edge Computing 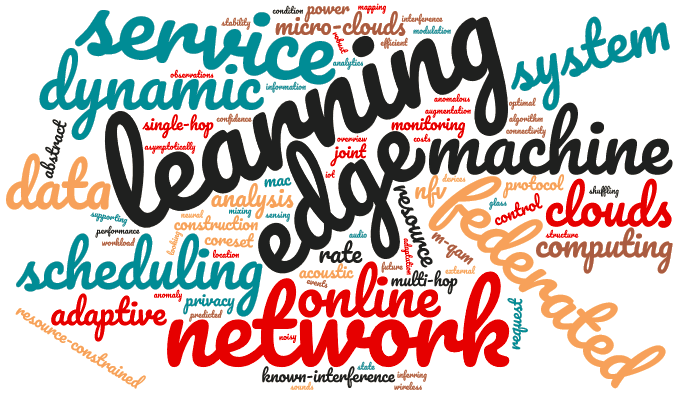 Copyright notice: All the manuscripts posted on this site are the authors' own versions, for which electronic posting is allowed by each publisher's policy. The published version can be found using the DOI link (if available) for each paper.

For IEEE publications: © 20xx IEEE. Personal use of this material is permitted. Permission from IEEE must be obtained for all other uses, in any current or future media, including reprinting/republishing this material for advertising or promotional purposes, creating new collective works, for resale or redistribution to servers or lists, or reuse of any copyrighted component of this work in other works.

For other publications: Separate notices appear inside each document.